The Ladies of Jewelia: A community’s best friend 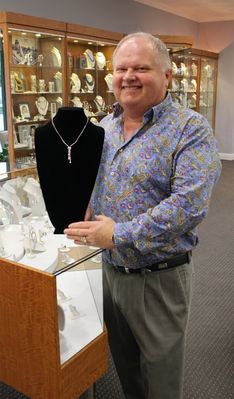 That’s exactly what’s happened with a single necklace, created and donated by a local jeweler, and the twelve women who have shared the necklace and her mission with the entire Treasure Coast.

At a charity luncheon a few years ago, table-mates told local writer and IRSC Instructor Wendy Dwyer about a book they were reading called, “The Necklace.” by Cheryl Jarvis, which chronicled 13 California women who decided to jointly purchase a very expensive necklace and share ownership.

While some of the women knew one another, most were only passing acquaintances or hadn’t met at all. The experiment in joint ownership transformed the women’s lives, and reading the book gave Dwyer an idea.

She approached Greg Childress, who was about to open G. Alan’s Fine Jewelry and Coin on Midway Road, and shared the story and her idea.

Without even blinking, Childress agreed to design and donate a one-of-a-kind, $12,500 necklace to HANDS of St. Lucie County, a free clinic that provides primary medical, dental, mental health, and vision care to uninsured residents of St. Lucie County.

Instead of auctioning off or raffling the unique piece of jewelry, the necklace would be shared by twelve local women for one year, each wearing the necklace for one month.

During the month she was to wear the necklace, each woman would agree to raise at least $1,000 in donations and as much awareness about the HANDS Clinic as possible.

Because there are 65,000 uninsured St. Lucie County residents, raising awareness was as important as raising funds to help provide life-saving care.

Nicknamed “Jewelia” in honor of the original necklace worn by the pioneer women in California who created the original experiment, East Coast Jewelia made her debut in April, 2015 at a dinner coordinated by HANDS Fund Development Director, Sydney Liebman.

According to Liebman, “Because of the generous donation of talent from local medical professionals, that $217,139.79 translates to more than $217 million in services provided by the clinic to members of the community. Additionally, the availability of primary health services has helped decrease wait times at local emergency rooms that were previously utilized by uninsured as their only option for primary health care services, and the amount of unpaid patient care has also decreased because of the success of HANDS of St. Lucie County.”

The timing could not have been more perfect because state funding cuts hit the HANDS Clinic especially hard, and had it not been for the creativity, energy, and enthusiasm of the twelve women privileged enough to wear the necklace, the clinic may have been forced to close its doors.

Each woman involved used her skills, ingenuity, talents, and creativity to raise awareness and funds.

Many hosted special events, including Sandee Allen’s Labor Day Little Black Dress Party that featured a surprise Little Black Dress Male fashion show the likes of which the Treasure Coast has never before seen, a dance party, a Fruitcake Frolic and Scavenger Hunt at a local botanical garden, privately hosted fundraising dinners, and even photo shoots with the now-famous necklace.

Along the way, word of the unique fundraising idea spread, and in January, Dale Muegenberg, one of the original Women of Jewelia and the inspiration for Chapter Four of The Necklace, visited from California and quickly bonded with her East Coast counterparts, inspiring the Treasure Coast women tremendously in their own unique journey.

“It’s been an incredible year,” said HANDS Director, Dr. Andrew Passeri. “The amount of work and creativity that has come from this amazing group of women is awe-inspiring. And the benefit to uninsured residents of St Lucie County has been palpable. Through their efforts to raise awareness, we have gained attention at the local and state level, which has helped garner important funding and grants to help keep the clinic open.”

Greg Childress, who designed and donated the St. Lucie County necklace, has also been surprised by its powerful journey.

“I love what the HANDS Clinic does to help individuals in our community who are working but simply cannot afford health care. None of us should have to make a choice between the rent and getting medical care when we’re sick,” he said.

“I am honored to have been able to help raise awareness for the HANDS Clinic, and I am overwhelmed by the amount of talent and energy the twelve women involved have invested.”

And while Jewelia, the necklace, may not be able to share her opinion, the lovely diamond necklace which has become a local dignitary in her own right certainly has a wealth of stories to tell. Since her debut, she has graced over hundreds of necks (male and female) throughout St. Lucie County.

Because of that, her clasp has been replaced five times already, she’s had no less than twelve ‘spa days’ for cleaning and maintenance, has lost and had one diamond replaced, nearly been arrested, shared and created secrets, moments, and forever memories, forged friendships, and most importantly Jewelia has helped save lives and improve the quality of life in St. Lucie County.

On April 23, a new generation of Ladies of Jewelia will be introduced at Port St. Lucie Botanical Gardens. May they learn

Maybe diamonds aren’t really a girl’s best friend, but in less than one year, the ones in Jewelia have certainly proven to be the best friends of an entire community.